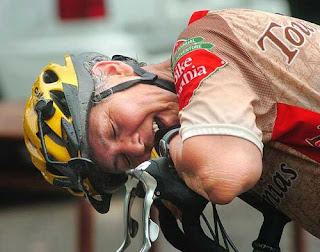 Does this include motorcycles?

Of course I no longer own one so if anyone will lend me a nice Harley or Honda I'll bike to work Friday.

Otherwise I won't.  My last bike was stolen and its 30 miles from my house to the Courthouse.  Besides even if I did I'd look like this guy by the time I got there.

New Braunfels, San Antonio and Austin are the only Texas cities that have officially participated in the past through either city  government or nonprofit organizations.

The league suggests five steps to ensure safe travel when commuting by bike: follow the rules of the road, be visible and predictable to motorists, anticipate conflicts on the road and always where a helmet.

New Braunfels Roots and Shoots participated in organizing rides in the past, but not this year.

While the group is not formally rallying local professionals to get on their bicycles this Friday, they do plan to make a second attempt at a yellow bike program soon, and Seguin will launch one in the coming weeks.

A yellow bike program takes used commuter bicycles, paints them yellow like a taxi and leaves them at designated posts for anyone to use — simply ride to the nearest post close to one’s destination, and leave the bike for others to use.

Cities throughout the United States and world have tried the programs to varying success. Some, such as Copenhagen, used locks and stations that operated on a coin deposit (once the bike was relocked to a station the funds were returned) but misuse and poor maintenance became issues.

“We will be launching a yellow bike program again. Last year we did it with a low number of volunteers to maintain it, and eventually the bikes were stolen or disappeared,” said Tracy Celio, president of the New Braunfels Roots and Shoots.

Bike to Work Day
When: Friday
If you bike Friday:: Check for more recommendations at www.bike league.org
Posted by Sam at 6:52 AM