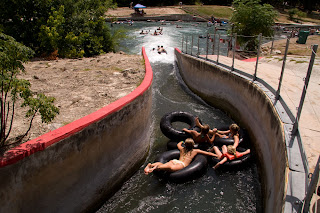 Two San Antonio men were stabbed in a fight at a New Braunfels tube chute late Sunday night, according to authorities.

An anonymous tipster called 911 around 7:15 p.m. Sunday to report that several men were fighting at the Prince Solms Park chute, located at 100 Liebscher Drive, according to a New Braunfels Police Department news release.

While officers were en route to the fight, the caller told police the men physically fought and then dispersed.