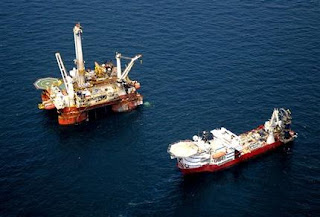 Well the containment dome/box plan didn't seem to work out.

The next plan, which I believe has the best chance to succeed, is to drill a relief well to connect with the already drilled hole that is spewing oil is weeks away from being completed.  I can't see how somehow heating the containment box with warm water will help as it would only melt the methane/ice crystals releasing the gas.

1st try to divert oil aborted; tar blobs hit Ala.
By HARRY R. WEBER and SARAH LARIMER
Associated Press Writers
ON THE GULF OF MEXICO (AP) -- As a massive oil leak spit thousands of gallons more crude into the Gulf of Mexico, a big box that BP hoped would be its savior sat idle hundreds of feet away, encased in ice crystals.
The company's first attempt to divert the oil was foiled, its mission now in serious doubt. Meanwhile, thick blobs of tar washed up on Alabama's white sand beaches, yet another sign the spill was worsening.
It had taken about two weeks to build the box and three days to cart it 50 miles out and slowly lower it to the well a mile below the surface, but the frozen depths were just too much. BP officials were not giving up hopes that a containment box - either the one brought there or another one being built - could cover the well. But they said it could be days before another attempt to capture the oil and funnel it to a tanker at the surface would be tried.
"I wouldn't say it's failed yet," BP chief operating officer Doug Suttles said. "What I would say is what we attempted to do ... didn't work."
There was a renewed sense of urgency as dime- to golfball-sized balls of tar began washing up on Dauphin Island, three miles off the Alabama mainland at the mouth of Mobile Bay and much farther east than the thin, rainbow sheens that have arrived sporadically in the Louisiana marshes.
"It almost looks like bark, but when you pick it up it definitely has a liquid consistency and it's definitely oil," said Kimberly Creel, 41, who was hanging out and swimming with hundreds of other beachgoers. "... I can only imagine what might be coming this way that might be larger."
About a half dozen tar balls had been collected by Saturday afternoon at Dauphin Island, Coast Guard chief warrant officer Adam Wine said in Mobile, and crews in protective clothing patrolled the beach for debris. Authorities planned to test the substance but strongly suspected it came from the oil spill.
In the nearly three weeks since the Deepwater Horizon rig exploded April 20, killing 11 workers, about 210,000 gallons of crude a day has been flowing into the Gulf. Until Saturday none of the thick sludge - those iconic images of past spills - had reached shore.
It had taken more than 12 hours to slowly lower to the seafloor the peaked box the size of a four-story house, a task that required painstaking precision to accurately position it over the well for fear of damaging the leaking pipe and making the problem worse. Nothing like it had been attempted at such depths, where water pressure can crush a submarine.
Company and Coast Guard officials had cautioned that icelike hydrates, a slushy mixture of gas and water, would be one of the biggest challenges to the containment box plan, and their warnings proved accurate. The crystals clogged the opening in the top of the peaked box, BP's Suttles said, like sand in a funnel, only upside-down.
Options under consideration included raising the box high enough that warmer water would prevent the slush from forming, or using heated water or methanol. Even as officials pondered their next move, Coast Guard Rear Adm. Mary Landry said she must continue to manage expectations of what the containment box can do.
"This dome is no silver bullet to stop the leak," she said.
The captain of the supply boat that carried the hulking, concrete-and-steel vault for 11 hours from the Louisiana coast last week wasn't giving up hope.
"Everybody knew this was a possibility well before we brought the dome out," Capt. Demi Shaffer, of Seward, Alaska, told an Associated Press reporter stationed with the 12-man crew of the Joe Griffin in the heart of the containment zone. "It's an everyday occurrence when you're drilling, with the pipeline trying to freeze up."
The spot where the Deepwater Horizon rig exploded and sank now teems with vessels working on containing the rogue well. There are 15 boats and large ships at or near the site - some being used in an ongoing effort to drill a relief well, considered a permanent if weeks-away fix.
News that the containment box plan, designed to siphon up to 85 percent of the leaking oil, had faltered dampened spirits in Louisiana's coastal communities.
"Everyone was hoping that that would slow it down a bit if not stop it," said Shane Robichaux, of Chauvin, a 39-year-old registered nurse relaxing at his vacation camp in Cocodrie. "I'm sure they'll keep working on it till it gets fixed, one way or another. But we were hopeful that would shut it down."
The original blowout was triggered by a bubble of methane gas that escaped from the well and shot up the drill column, expanding quickly as it burst through several seals and barriers before exploding, according to interviews with rig workers conducted during BP PLC's internal investigation. Deep sea oil drillers often encounter pockets of methane crystals as they dig into the earth.
As the bubble rose, it intensified and grew, breaking through various safety barriers, said Robert Bea, a University of California Berkley engineering professor and oil pipeline expert who detailed the interviews exclusively to an Associated Press reporter.
Posted by Sam at 5:33 AM