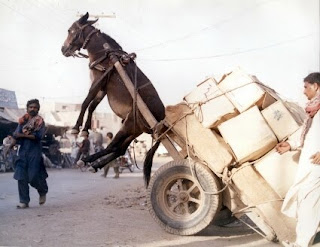 What will they dream of next?

A small Syrian-backed terrorist group in Gaza said its activists blew up a donkey cart laden with explosives close to the border with Israel on Tuesday, killing the animal but causing no human casualties.

Abu Ghassan, spokesman for the terrorist group, said more than 200 kilograms of dynamite were heaped on the animal-drawn cart. He added that the explosives were detonated 60 meters from the concrete security barrier that separates the territory from Israel.

The donkey was killed in the blast, but there were no reports of human casualties. Israeli troops routinely patrol the border, and impoverished Gazans often gather rubble in the area.

The Israeli military confirmed the blast, but had no further comment. The IDF said Gaza terrorists also fired two mortar shells into Israel on Tuesday, which fell in the Netiv Ha'asara area without causing damage or casualties.

Earlier this week, masked gunmen from an Islamist group torched a UN-run summer camp for children and teens in Gaza.

The head of UNRWA in Gaza, John Ging, said the assailants tied up the guard, burned tents and vandalized bathrooms at the campgrounds. UN officials said the attackers left behind three bullets and a note threatening to kill Ging and others unless the UN cancels its activities for some 250,000 Gaza children.

Two days before the incident, the previously unknown "The Free of the Homeland" group issued a statement criticizing the camp's organizer, the United Nations Relief and Works Agency (UNRWA), for "teaching schoolgirls fitness, dancing and immorality."