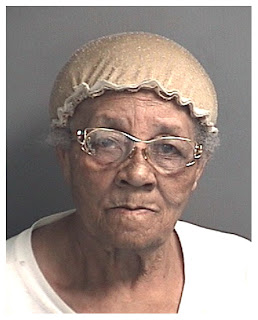 I bet the kids in the neighborhood love her.

Ola Mae Agee, pictured in the mug shot above, was collared after a month-long investigation by the Escambia County Sheriff's Office targeted drug dealing in her Pensacola neighborhood.

During the police operation, Agee sold $20 worth of crack to an undercover cop inside her Martin Luther King Drive home. The April 30 transaction was secretly videotaped by investigators, according to a sheriff's report, which listed Agee as a "retired janitor."

Police executed a search warrant at Agee's home yesterday, and charged the senior citizen with selling cocaine. She was later released from jail on her own recognizance due to her age.

Remarkably, Agee is not the oldest person arrested for peddling crack. In 2004, a 96-year-old North Carolina woman was arrested (along with some younger kin) for selling the drug from her Kings Mountain home.
Posted by Sam at 9:09 PM