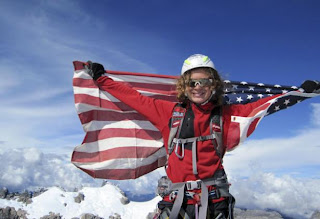 Sorry, I think that:

A.  His parent's are crazy;
B.  He's a little crazy;
C. His parents are not doing him a service by catering his every whim; or
D.  All of the above.

Guess which one it is.  Oh, and I'm not a grinch I just play one on TV.

On top of the world:  13 year old becomes youngest person to conquer Everest
by Andrew Johnson - The Independent


Of the 50 climbers who reached the peak of the world's highest mountain in the early hours of yesterday morning, one stood head and shoulders below the rest.
At just 13, Jordan Romero became the youngest person to climb Mount Everest, surviving the extreme weather that has claimed the lives of 179 climbers over the years, and air so thin that bottled oxygen is needed.
Jordan, from California, has now scaled the highest peak on every continent bar one – climbing Africa's Kilimanjaro when he was nine. In December he will attempt to complete the set by tackling Antarctica's Vinson Massif. If he is successful he will break another "youngest" record, set in January by Johnny Collinson, 17 from Utah.
He reached Everest's summit with the help of his father, stepmother and three Sherpa guides, and beat the record set by a 16-year-old Nepalese boy, Temba Tsheri, in 2001.
"I just want to do something big. It's all about the experience. I just happen to be 13," he said before embarking on his adventure.
It is climbing season on Everest, and so far this year 186 people have reached the summit, but two have died trying. In all, more than 2,700 climbers have scaled the 29,028ft of ice and rock since it was first conquered by Edmund Hillary and Tenzing Norgay in 1953.
There is, however, debate in the climbing community over the use of Everest as a glory trail. It is not considered a technically difficult climb – Bonita Norris, 22, last week became the youngest British woman to reach the peak and did so after 18 months' training and no previous climbing experience. But the challenge lies in the lack of oxygen and the extreme weather, with frostbite, hypothermia and snow-blindness, as well as death, all real dangers.
Some critics had argued that Jordan was too young to attempt the summit. Nepal has banned climbers under the age of 16, so he began his climb on the Chinese side, where there is no age limit.
Posted by Sam at 9:15 AM