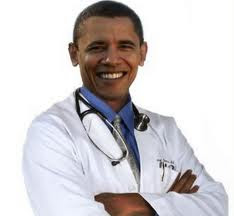 Is it part of Obama Care now?

By DANIEL HALPER - The Weekly Standard
According to a background briefer provided by the White House, President Barack Obama is asking doctors to help deal with guns. Here's the relevant passage:


PRESERVE THE RIGHTS OF HEALTH CARE PROVIDERS TO PROTECT THEIR PATIENTS AND COMMUNITIES FROM GUN VIOLENCE:


We should never ask doctors and other health care providers to turn a blind eye to the risks posed by guns in the wrong hands.

 Protect the rights of health care providers to talk to their patients about gun safety: Doctors and other health care providers also need to be able to ask about firearms in their patients’ homes and safe storage of those firearms, especially if their patients show signs of certain mental illnesses or if they have a young child or mentally ill family member at home. Some have incorrectly claimed that language in the Affordable Care Act prohibits doctors from asking their patients about guns and gun safety. Medical groups also continue to fight against state laws attempting to ban doctors from asking these questions. The Administration will issue guidance clarifying that the Affordable Care Act does not prohibit or otherwise regulate communication between doctors and patients, including about firearms.