Opinion in "The Gray Lady" 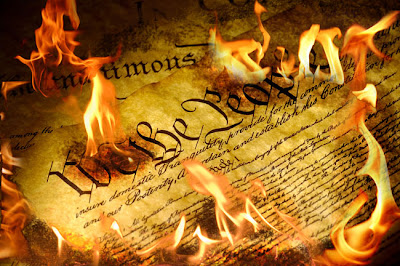 Well there you go, the U.S. Constitution is just so downright out of date.

Mr. Seidman, you are an idiot, Sir, and not even a useful one at that!


AS the nation teeters at the edge of fiscal chaos, observers are reaching the conclusion that the American system of government is broken. But almost no one blames the culprit: our insistence on obedience to the Constitution, with all its archaic, idiosyncratic and downright evil provisions.

Consider, for example, the assertion by the Senate minority leader last week that the House could not take up a plan by Senate Democrats to extend tax cuts on households making $250,000 or less because the Constitution requires that revenue measures originate in the lower chamber. Why should anyone care? Why should a lame-duck House, 27 members of which were defeated for re-election, have a stranglehold on our economy? Why does a grotesquely malapportioned Senate get to decide the nation’s fate?

Our obsession with the Constitution has saddled us with a dysfunctional political system, kept us from debating the merits of divisive issues and inflamed our public discourse. Instead of arguing about what is to be done, we argue about what James Madison might have wanted done 225 years ago.