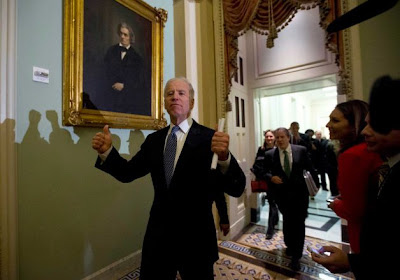 Man, who'd ever thought I'd be thanking Joe Biden?

WASHINGTON (AP) — Legislation to negate a fiscal cliff of across-the-board tax increases and sweeping spending cuts to the Pentagon and other government agencies is headed to the GOP-dominated House after bipartisan, middle-of-the-night approval in the Senate capped a New Year's Eve drama unlike any other in the annals of Congress.

It would prevent middle-class taxes from going up but would raise rates on higher incomes. It would also block spending cuts for two months, extend unemployment benefits for the long-term jobless, prevent a 27 percent cut in fees for doctors who treat Medicare patients and prevent a spike in milk prices.