TAKE AWAY THEIR GUNS, yells the crowds 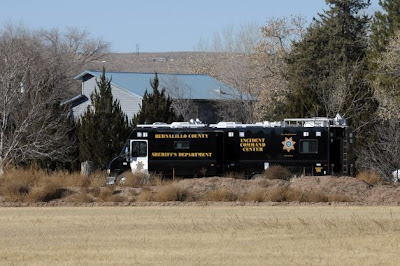 ALBUQUERQUE, N.M. (AP) — A 15-year-old boy remained in custody Sunday night as detectives tried to piece together what led to the shooting of his parents and three of their children who were found dead in a New Mexico home.

The teenager was arrested on murder and other charges in connection with the shootings, which happened Saturday night at the home in a rural area southwest of downtown Albuquerque, the Bernalillo County Sheriff's Department said.

Authorities identified the victims late Sunday as Greg Griego, 51, his wife Sara Griego, 40, and three of their children: a 9-year-old boy, Zephania Griego, and daughters Jael Griego, 5, and Angelina Griego, 2. The suspect was identified as Nehemiah Griego.