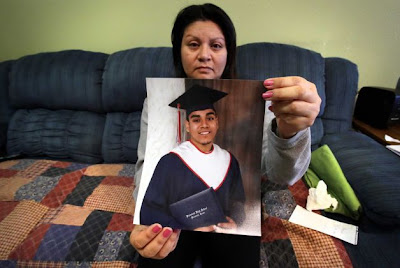 My heart goes out to this poor Mother.

I hope they catch her son's killer(s).

Someone knows who did this.

Hours after his first night shift ended at The Rim's Staples store, Christopher Hinojos died on a stranger's front porch where he frantically tried to get help after being shot by a man who stole his beat-up Toyota Camry.

Droplets of blood stained a witness' front door and sidewalk as yellow crime tape dangled from a nearby fence Wednesday, a day after the fatal shooting.

Police have released few details but said Hinojos, 18, may have known his killer.