OMFG People, get a grip!! 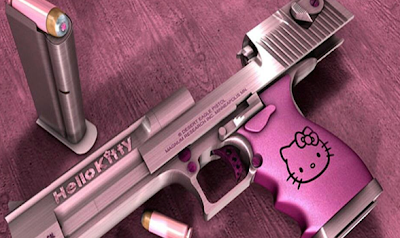 A 5-year-old Pennsylvania girl who told another girl she was going to shoot her with a pink Hello Kitty toy gun that blows soapy bubbles has been suspended from kindergarten.

Her family has hired an attorney to fight the punishment, which initially was 10 days for issuing a 'terroristic threat.' But her punishment was reduced to two days after her mother met with school officials and had the incident dropped to 'threatening to harm another student,' which apparently carries a lesser punishment.

"It's laughable," Robin Ficker, the girl's attorney told FoxNews.com. "This is a girl who had no idea about killing or what happened in Connecticut."