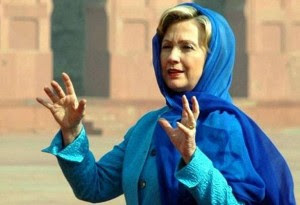 Is this where the concussion came from?

Nothing would surprise me at this point in time.


Clinton Injured, US Navy Seal Killed In Secret US Mission To Iran?

The European Union Times is reporting a very different story about Hillary Clinton than what is coming out of U.S. mainstream media. I have no way to gauge the veracity of the EUT story, but merely publish it here for the record:


A new Foreign Military Intelligence (GRU) report circulating in the Kremlin today is saying that United States Secretary of State Hillary Clinton was injured, and a top US Navy Seal Commander killed when their C-12 Huron military passenger and transport aircraft crash landed nearly 3 weeks ago in the Iranian city of Ahvaz near the Iraqi border.

Iranian intelligence agents quoted in this GRU report confirm that the C-12 Huron aircraft is still in their possession in Ahvaz, but will only admit that the plane was “forced to land because of technical problems”.

The US Navy Seal member reported killed in this bizarre incident, this report says, was indentified as Commander Job W. Price who as a leader of this highly specialized American Special Forces unit protects high-ranking diplomats traveling in Middle Eastern and Asian combat zones.