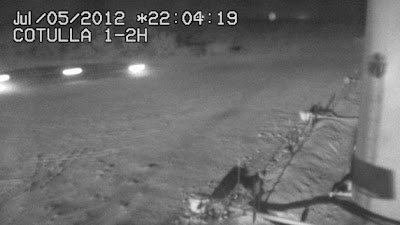 Maybe they are looking for work?

ARTESIA WELLS — Strange things are afoot in the South Texas oil patch and in the sky above. In a region that's seen its tax rolls and traffic problems swell from the scores of new residents, could extraterrestrials be the next wave?

Roughnecks working at a fracturing well in the Eagle Ford Shale drilling region say they saw unidentified lights in the night sky on consecutive days in October and captured blurry video of at least one of them.
Three months earlier, a security camera captured a blurry, black-and-white image of what appears to be a flying saucer hovering ominously at another well site.

So far, no little green men have applied for a truck-driving job, but in a region desperate for more workers, they may not get turned down if they did.