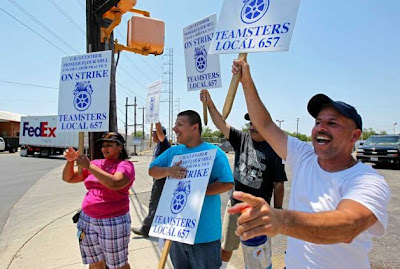 They may not even get re-hired.

Stupid folks are they, particularly in the economic quagmire we appear to be in.

After 21 months on the picket line, unionized Guenther & Son Inc. flour mill workers said they called off their strike to be able to vote on the next contract.

The current contract expires April 30. The union on Tuesday offered to return its members to work.

“We felt like we should take the fight inside with the law the way it is and the contract coming up,” said Frank Perkins, president of Teamsters Local 657, which represents the workers. “The guys didn't give up.”