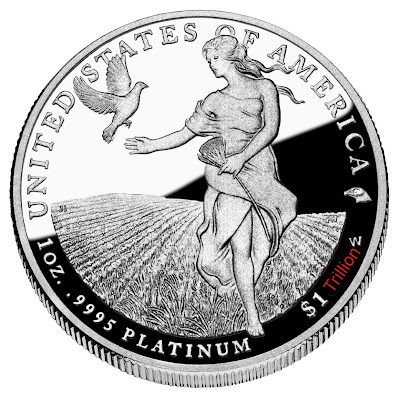 Oh yeah this will restore faith in our economy won't it?


With President Obama having kicked off debt ceiling negotiations by vowing not to negotiate over the debt ceiling, a new option for paying off the nation’s considerable tab is gaining momentum with cheeky fiscal and monetary wonks.

It goes like this: Should Congress fail to extend the U.S. debt limit — reached again on Dec. 31 — the president could ask the Treasury to begin printing trillion dollar coins (in a process explained mostly seriously by Jim Pethokoukis on his American Enterprise Institute blog), a number of which could then be put toward fulfilling debt obligations in the event new legislation stalls in Congress.

While there are laws in place to regulate how much paper, gold, silver or copper currency can be circulated by the government, there is nothing so clearly stated when it comes to platinum. That door open, the Treasury could have the U.S. Mint melt and mold a few trillion dollars of it, then ship the goods over to the Federal Reserve for safekeeping until the time comes to pay the bills.