You're under arrest...No, you are! 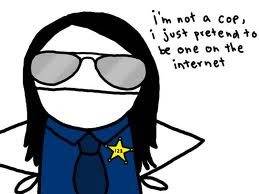 That just wasn't his lucky day.

KOB-TV reports (http://bit.ly/qRna9O ) that Tyree Appleberry was given the citation Wednesday on charges of impersonating a police officer then arrested for an outstanding warrant.

According to police, the 42-year-old turned on his strobe lights on his white Chevy Tahoe in an attempt to stop a driver, who turned out to be an undercover officer.