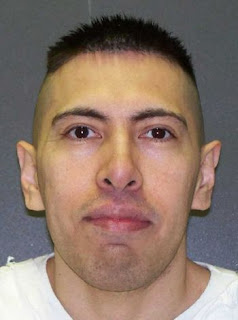 This man committed a most heinous murder.  Actually two murders.

He killed his wife in front of their children as she was trying to leave him because of his continuing abuse and domestic violence.  He then turned and shot the police officer in the head who had come to try to protect the wife.

The POS even stated that he deliberately shot the officer in his head because he knew the officers wore bullet-proof vests.  Sounds plenty smart to me.

So please get on with his rendezvous with his destiny.  Some will mourn his passing, most will not.

Count me amongst those in the latter category.

More than a decade after Frank Garcia fatally shot his wife and San Antonio Police Officer Hector Garza, the convicted cop-killer will face his own execution today in Huntsville — barring relief from a last-minute appeal filed Wednesday afternoon.

Filed in the state's Court of Criminal Appeals by the Capital Punishment Clinic at the University of Texas School of Law, the appeal again raises the issue of mental retardation and cites evidence first presented by Simon Azar-Farr, Garcia's federal appellate attorney. “I fully recognize that a heinous and awful crime took place and two very innocent lives were lost,” Azar-Farr said, but added the legal process needed to be thorough, all evidence should be reviewed and new evidence taken into consideration.

The attorneys with the law school took over the case because Azar-Farr's appointment didn't extend to the state level, according to the appeal documents.