The finger is pointing at y'all even harder now 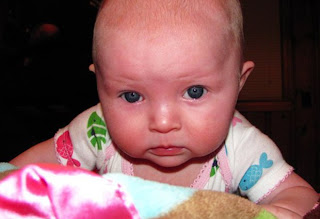 This doesn't bode well for the baby or her family which have moved higher up the list of suspects now.

KANSAS CITY, Mo. (AP) — Police say an FBI cadaver dog reacted to the scent of a dead person inside the Kansas City home where a baby girl disappeared nearly three weeks ago, and investigators discovered soil in the backyard that had been "recently disturbed or overturned," according to a released court document.

The affidavit, released Friday after being filed earlier this week in support of a search warrant targeting the family's home, also stated that the girl's mother, Deborah Bradley, "made the statement she did not initially look for her baby behind the house because she 'was afraid of what she might find.'"

Those details and others in the affidavit, publicly released for the first time Friday, led to a daylong search Wednesday of the family's home, where the parents say then-10-month-old Lisa Irwin must have been snatched in the middle of the night as the mother and two other boys slept. Bradley and the baby's father, Jeremy Irwin, reported the girl missing on Oct. 4 and have denied any role in the disappearance while insisting police have pointed the finger at them.