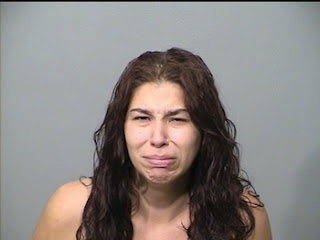 All sorts show up apparently at the "Occupy" movements.

This one from New Hampshire.

Boy, she doesn't look too happy, does she?

MANCHESTER - A city woman is accused of pimping a 16-year-old girl she met in Victory Park during the Occupy NH demonstrations.

Justina Jensen, 23, of 341 Hanover St., is charged with felony prostitution. Police allege Jensen met a teen at the local protest, which is an offshoot of Occupy Wall Street, and used the Internet to arrange a first liaison for the girl with a man who turned out to be an undercover police officer.

Police said the teen's mother called them Thursday about noon to say her daughter was missing and that her photograph had been posted on a website advertising adult party entertainment.