Just in time for Halloween? 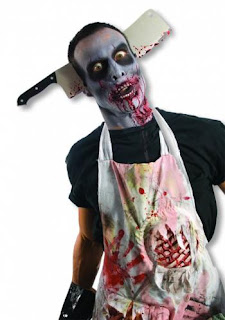 Jesus, this girl is crazy.  Where do these folks get ideas like this?

Do they not have a control button on their impulses?

Police arrested a waitress accused of hurling a meat cleaver at her supervisor and striking him on the head.

Maria Benavidez, 20, was charged Tuesday with aggravated assault with a deadly weapon, with bail set at $30,000. The incident occurred Oct. 9 at a restaurant on the far West Side, according to a police report and an arrest warrant affidavit.

The victim told police Benavidez had become upset because her work hours were being reduced, and she had opened an envelope containing a paycheck belonging to the victim's stepson, who also works there, the affidavit states.