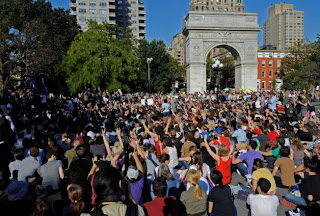 Maybe if you had chosen a degree in something worthwhile instead of Mayan Basket Weaving you wouldn't be out there protesting "woe is me!, woe is me!"

Demonstrators marched Saturday from Manhattan's Zuccotti Park, the group's unofficial headquarters where protesters have been camped out for the last 22 days. The trek was peaceful and orderly.

On Wednesday, dozens were arrested when thousands marched on Wall Street in their biggest show of support yet. Last Saturday, 700 people were arrested after they spilled onto the roadway while crossing the Brooklyn Bridge.