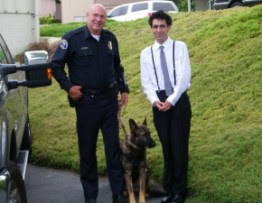 Man Busted For Marijuana After Petting K-9
From Clumsy Crooks -


If you have marijuana in your pocket, it's not a good idea to pet a patrolling police dog.

The Binghamton Press & Sun Bulletin reports that 48-year-old Kelly Simpson was busted Wednesday after he stopped to pet K-9 Tarah, who was on foot patrol with her handler in Endicott.

Simpson was charged with unlawful possession of marijuana, a violation, and released on an appearance ticket.
Posted by Sam at 8:51 AM