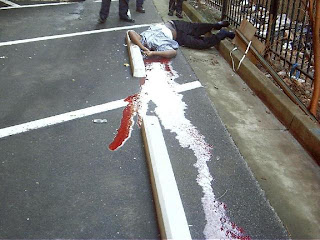 The law of unintended consequences?

Jesse Ramon didn't fatally shoot well-known female impersonator James Lee Whitehead when he mugged him in 2009 — a police officer accidentally did that.

But it took jurors less than 30 minutes Friday to find Ramon guilty of murder for causing the chain of events that led to Whitehead's death.

Ramon, 24, now faces up to life in prison. Jurors also deliberated his punishment for about two hours but were unable to reach a decision before state District Judge Ron Rangel sent them home for the weekend. The panel will continue deliberating on Monday.