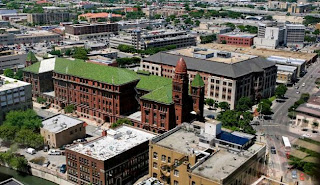 So three French-Moroccan nationals were found inside the Bexar County Courthouse at 2-3 a.m.

Ostensibly, one told police they were trying to get a better view of the city.

They are all apparently on the National Terrorist watch-list, which, of course, begs the question how did they get visas to come here?

They also apparently had photos of "soft-targets" i.e. infra-structures, malls, water treatment facilities and the like with them as well.

Good Work capturing them go out to the BCSO!!  Have fun FBI and Homeland Security with them.

Bexar County spokesperson Laura Jesse confirmed that the FBI is investigating and that five suspects are in FBI custody. Five men are in custody. All the men are foreign nationals, she said.