Pray for the children of North Korea 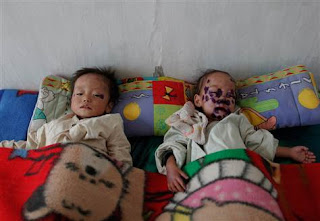 This is a looming, impending tragedy written by a few xenophobic, paranoid individuals.

"Their mothers have to bring them here on bicycles," said duty doctor Jang Kum Son in the Yellow Sea port city of Haeju. "We used to have an ambulance but it's completely broken down. One mother traveled 72 kilometers (45 miles). By the time they get here, it's often too late."

It's also getting late for North to get the massive amount of food aid it claims to need before the harsh winter sets in. The country's dysfunctional food-distribution system, rising global commodities prices and sanctions imposed over Pyongyang's nuclear and missile programs had contributed to what appears to be a hunger crisis in the North, even before devastating summer floods and typhoons compounded the emergency.