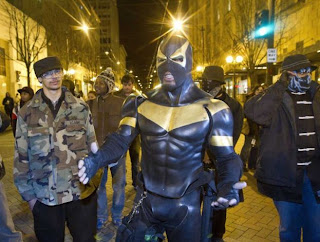 They wouldn't do this to the Green Lantern!

SEATTLE (AP) — A self-proclaimed superhero wore a charcoal-colored mask Thursday as he entered a Seattle courtroom where prosecutors said they hadn't yet decide whether to file charges against him in an alleged pepper spray attack.

Phoenix Jones, whose real name is Benjamin John Francis Fodor, was arrested early Sunday after police say he sprayed four people who had left a downtown nightclub. Fodor said he was trying to break up a fight when he was attacked; the club-goers insisted to police they hadn't been fighting.

During the hearing Thursday, a court officer asked Jones to remove his mask and he complied. He also wore a superhero uniform under a button-down shirt.