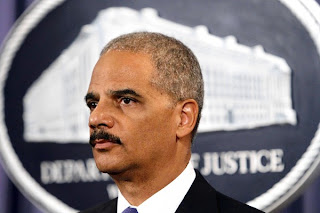 Well, Attorney General Eric Holder can't hide it anymore.  He either knew about it or was stupid and didn't understand it when he was briefed on it.

Reporting from Washington—
Senior Justice Department officials were aware that ATF agents allowed firearms to be "walked" into Mexico, according to a series of emails last year in which they discussed two undercover operations on the Southwest border, including the failed Fast and Furious program.

In the emails that the department turned over to congressional investigators, Justice Department officials last October discussed both the Fast and Furious gun-trafficking surveillance operation in Phoenix and a separate investigation from 2006 and 2007 called Operation Wide Receiver. In Wide Receiver, which took place in Tucson, firearms also were acquired by illegal straw purchasers and lost in Mexico, the emails say.

The term "gun walking" is central to the failure of Fast and Furious. Agents with the federal Bureau of Alcohol, Tobacco, Firearms and Explosives purposely allowed licensed firearms dealers to sell weapons to illegal straw buyers, hoping to track the guns to Mexican drug cartel leaders and arrest them. But they lost track of more than 2,000 weapons, and the Mexican government says some of them have turned up at about 170 crime scenes there. Two were recovered at the scene of a U.S. Border Patrol agent's slaying in Arizona in December.