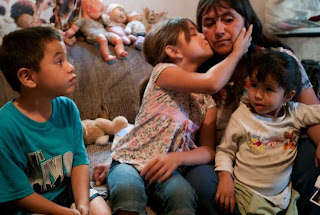 The untold story behind the Mexican Drug War.

CIUDAD JUÁREZ, Mexico — Eleazar glanced up from the toy cars he pushed across a threadbare carpet, flashing to the moment that men gunned down and killed his father.

“They were in a black pickup,” the 10-year-old whispered as a younger brother and sister listened with averted eyes. “The windows were dark. I couldn't see them.”

Eleazar's father had brought him and a brother along to an appointment. Their father parked, told his sons to stay put and walked across the street for the meeting. Loud bangs jolted the boys seconds later. Eleazar watched the killers drive off, then ran to his dead dad's side as he lay face down in the street.