You got to be fricking kidding me, they chased him away with flashlights in his face???!!! 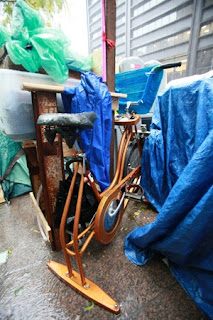 Great.  He sexually assaults a woman in their midst and they yell at him to leave.

Of course they won't call the cops.

And now, the perv is still on the loose.

Wall Street protesters in Zuccotti Park battened down the hatches yesterday as the early October snow turned their tents into igloos, but the close quarters also made easy pickings for one predator.

A sex fiend barged into a woman’s tent and sexually assaulted her at around 6 a.m., said protesters, who chased him from the park.

“Pervert! Pervert! Get the f--k out!” said vigilante Occupiers, who never bothered to call the cops.

“They were shining flashlights in his face and yelling at him to leave,” said a woman who called herself Leslie, but refused to give her real name.