The war heats up 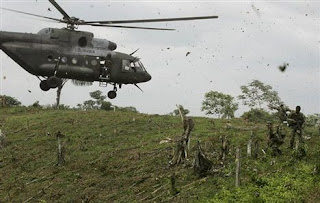 
MEXICO CITY (AP) -- A relatively new drug gang is responsible for killing at least 67 people whose bodies were found over the course of a couple of weeks in the Gulf coast state of Veracruz, Mexican authorities said Friday.

Vergara said the gang is also responsible for dumping 35 bound, tortured bodies on a busy boulevard in a suburb of Veracruz on Sept. 20.