A bridge too far? 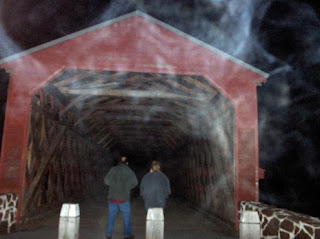 Allegedly it was a haunted bridge at that.

There will be one seriously pissed-off ghost out there now.

Police said that Benjamin Arthur Jones, 24, and Alexander William Jones, 25, used a torch to tear apart the Covert's Crossing Bridge late last month or early this month. The bridge had been in North Beaver Township since at least the early 1900s and was worth an estimated $100,000.

The Joneses, both from New Castle, were being held in the Lawrence County Prison on $25,000 bail, according to court records. They face felony charges of criminal mischief, theft, receiving stolen property and conspiracy.