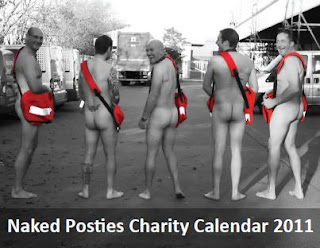 Maybe he's also trying to show them he's crazy so he can receive disability payments for that?


Naked ex-postman superglues himself to desk in Job Centre protest
A former postman stripped off and superglued himself to a desk at his local Job Centre as a protest against being denied Disability Living Allowance.
Metro.co.uk -

Ian Robinson, 43, had to leave his job after developing arthritis, but the authorities have ruled he is not entitled to disability benefits and he must now try to survive on Jobseeker's Allowance.

Mr Robinson decided to demonstrate how angry he was about the decision by staging a bizarre protest in front of shocked staff at Bridlington Job Centre.

'When I started taking my clothes off, a man said "You can't do that in here", so I went over and glued myself to his desk. Nobody tried to stop me, it was too late by that point,' he told the Yorkshire Post.

The naked demonstrator prised himself off the furniture before paramedics arrived and he suffered only some redness to the skin on his arms.