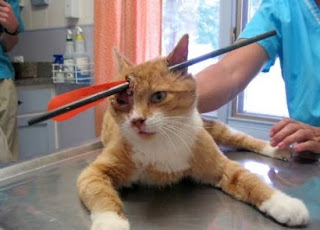 Be careful with any weapon.

ALWAYS treat any gun as if it is loaded.

An infant girl was in critical condition Friday evening after a bullet accidentally fired from her father's gun struck her in the head at their home in Bandera County, officials said.

The child, 2, was airlifted to University Hospital in San Antonio with a single gunshot wound to the head, said Bandera County Sheriff's Office chief deputy Richard Smith. The bullet from the 9 mm pistol entered the back of the child's head and exited her temple, and Smith said she had a “good chance of recovering.”

The girl's mother called 911 to report the shooting around 1 p.m. at their mobile home in Bandera, Smith said. When officers arrived they were told the girl's father, 47, was cleaning his gun in the living room when it discharged one round, which went through a kitchen cabinet and struck his daughter. Smith said the father claimed he thought the gun was empty.