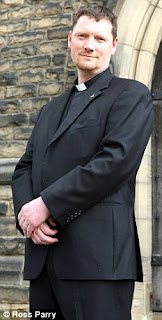 
Priest outrages police by telling congregation: 'My advice to poor is to shoplift
By: Graham Smith - dailymail.co.uk

A clergyman has been criticised as 'highly irresponsible' after advising his congregation to shoplift following his Nativity sermon.

Father Tim Jones, 41, broke off from his traditional annual sermon yesterday to tell his flock that stealing from large chains is sometimes the best option for vulnerable people.

It is far better for people desperate during the recession to shoplift than turn to 'prostitution, mugging or burglary', he said.

The married father-of-two insisted his unusual advice did not break the Bible commandment 'Thou shalt not steal' - because God's love for the poor outweighs his love for the rich.

But the minister's controversial sermon at St Lawrence Church in York has been slammed by police and a local MP, who say that no matter what the circumstances, shoplifting is an offence.

Delivering his festive lesson, Father Jones told the congregation: 'My advice, as a Christian priest, is to shoplift. I do not offer such advice because I think that stealing is a good thing, or because I think it is harmless, for it is neither.

'I would ask that they do not steal from small family businesses, but from large national businesses, knowing that the costs are ultimately passed on to the rest of us in the form of higher prices.

'I offer the advice with a heavy heart and wish society would recognise that bureaucratic ineptitude and systematic delay has created an invitation and incentive to crime for people struggling to cope.'

He added that he felt society had failed the needy, and said it was far better they shoplift than turn to more degrading or violent options such as prostitution, mugging or burglary.

Father Jones cited the example of an ex-prisoner who had been forced to live on less than £100, including a crisis loan, over six weeks after his release from jail.

He continued: 'My advice does not contradict the Bible's eighth commandment because God's love for the poor and despised outweighs the property rights of the rich.

'Let my words not be misrepresented as a simplistic call for people to shoplift. The observation that shoplifting is the best option that some people are left with is a grim indictment of who we are.

'Rather, this is a call for our society no longer to treat its most vulnerable people with indifference and contempt. Providing inadequate or clumsy social support is monumental, catastrophic folly.'

But a spokesman for North Yorkshire Police said: 'First and foremost, shoplifting is a criminal offence and to justify this course of action under any circumstances is highly irresponsible.

'Turning or returning to crime will only make matters worse, that is a guarantee. We recognise some people find themselves in difficult circumstances but support is readily available and must be sought.'

Local Tory MP Anne McIntosh, who has campaigned in Parliament for stronger sentences for shoplifters, admitted that there had been an 'over-commercialisation' of the festive period which encourages people to spend.

But she said: 'I cannot condone inciting anyone to commit a criminal offence, shoplifting is a crime against the whole local community and society.'

This isn't the first time Father Jones has courted controversy.

He hit the headlines in May 2008 when he protested against a shop stocking Playboy stationery aimed at youngsters. He tossed the items onto the floor complaining they were 'cynical and wicked'. The shop bowed to his one-man protest and agreed to stop stocking Playboy-branded merchandise.