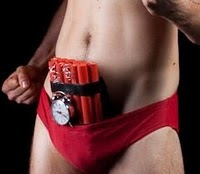 Yes, I know I've written about this before but it still really bothers me.

I mean does what happened on the plane on Christmas day really mean we have to be so much further inconvenienced such as not being able to use the rest rooms, no use of computers, no reading materials, and nothing in your lap, during the last hour of a flight?

No use of a backscatter x-ray machine will stop the stupidity that was on display when Umar Farouk Abdulmutallab was able to get on board an International Northwest flight from Amsterdam to Detroit:

2. Having purchased a one-way ticket;

3. Having paid for the one-way ticket in cash; and

Didn't any of these things set up any red flags in anyone's mind?

No amount of check lists and no-fly lists or sophisticated machines will prevent this from occurring again when no one spotted this when he purchased his ticket that day and shows up with no passport and no luggage.

Fire Janet Napolitano, get someone who is competent to replace her and then hire someone competent and place them in charge of the TSA.
Posted by Sam at 6:11 AM