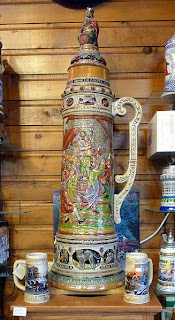 Yeah, you know it might send the wrong message.

Particularly since the giant beer stein would be visible from I-35 and Lord knows, we don't need to give folks more incentive to drink and drive.

Why not locate the giant beer stein on the Wurstfest grounds? I think it would make more sense there.

Mike Sevel asked the New Braunfels City Council on Monday to consider his idea for a giant stein made from an empty silo to be placed at the entrance of town. But city councilors didn’t appear to find the notion appealing.

“I congratulate Mr. Sevel on his ingenuity and creativity, but I don’t know that’s something the city of New Braunfels should be pursuing,” said Mayor Bruce Boyer.

Sevel unveiled his “Grosse Stein Project” to the council — a converted industrial silo standing more than 30-feet tall and decorated as an enormous beer mug, one he would like to build at the corner of Seguin Avenue and Interstate 35 next to the New Braunfels Visitors Center.

“I think this would be a beacon that says ‘we’re different than our sister cities along I-35,” Sevel told councilors. “It says, ‘come visit us.’”

AMD Milling Co. said it would donate the silo to Sevel to build his massive pillar, and Sevel said local artist and muralist Brent McCarthy would be willing to paint it with local landmarks.

He said he plans for the stein to be a warm welcome for tourists, and a source of civic pride.

But councilors Monday were skeptical that the Grosse Stein Project was a good idea for city’s front door.

“It’s an extremely eye-catching proposal, but I personally think it’s something that might be better-suited to the Wurstfest grounds than at the entryway to our city,” said Councilwoman Kathleen Krueger.

Sevel asked councilors not to answer immediately, but to mull it over before he officially proposes its construction to the city in February.

“You just might look at it for awhile and say, ‘This might be a great idea,’” he told council.

Also on Monday, the city council approved the purchase of the Brake Check on Walnut Avenue and Business Interstate 35.

The business is the second-to-last remaining property the city must claim before it will have acquired all the necessary right-of-way to begin its widening project.

The $25 million project will convert the street into a four-lane road with a raised median and sidewalks from Interstate 35 to Landa Street. Construction is scheduled to be finished in 2011.

Symons, which has operated in New Braunfels 40 years, manufactures concrete forms that mold steel used in large industrial projects.
Posted by Sam at 6:32 AM