He's smelling it too!! 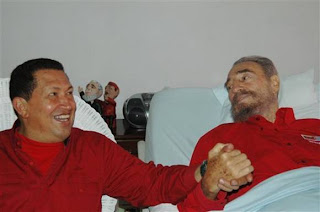 Another fool heard from.

Veteran Cuban leader Fidel Castro on Friday dismissed US President Barack Obama's trip to UN climate change talks in Copenhagen as a "show," and complained that the world's poor will shoulder the burden of any summit agreement.

"It is already evident that a great catastrophe threatens our species," wrote Castro, 82.

Perhaps the worst part of the summit "is blind selfishness of a rich and privileged minority that intents to impose the bulk of the necessary sacrifices on the immense majority of planet inhabitants," Castro wrote.

He opined that "for the chiefs of the empire (the United States), despite their maneuvers and cynical lies, the moment of truth is arriving. Their own allies believe them less and less."

In the article, which appeared in government-run media, Castro quotes at length leftist Bolivian President Evo Morales and Venezuelan President Hugo Chavez, who both spoke at the summit.

The former Cuban president, who still leads the Cuban Communist Party, earlier criticized Obama for accepting the Nobel Peace Prize and lashed out at his climate policies, accusing the US president of not fighting the "oligarchy of irresponsibly" who are opposing change.

"Obama is not ignorant. Like (Al) Gore, he knows the grave danger that threatens everyone, but he vacillates and is weak in the face of a blind and irresponsible oligarchy in that country," Castro wrote in an editorial published December 9.

Castro has not appeared in public since he underwent major intestinal surgery more than three years ago. His brother Raul became interim president in 2006, and took over the presidency in February 2008.