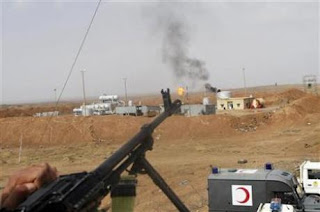 When I first heard about the 'occupation' of Iraqi territory by Iran taking over the well the news said it was all a mistake apparently and nothing happened.

Well apparently that isn't true as tensions are still high.

Watch for oil prices to shoot through the roof soon.

Iraqi troops say they will defend the well, where Iranian troops raised a flag for several days this month.

It is unclear how many troops are involved in the stand-off, but as many as 30 lightly armed Iraqi troops usually occupy border outposts in sensitive areas, and up to 10 in other areas. Some 11 Iranian soldiers are stationed near the disputed well.

The seizure of the well, which Iraq says is part of its Fakka oilfield in southeast Maysan province, triggered protests from the government in Baghdad and caused a rise in prices on jittery world oil markets.

The Iranian forces have since pulled back, but Iraq says they are still on its territory, stirring echoes of the border dispute that led to the eight-year Iran-Iraq war in the 1980s, in which about 1 million people died.

"These wells in the Fakka region are Iraqi, and we will defend them to the last drop of blood," said Brigadier-General Razak Abdul Hassan of the Iraqi border guards at Fakka.

The Iranians are 100 meters inside Iraqi territory, he said, some 80 meters from the disputed well. Iraqi troops watch from nearby, and both sides appear to be hunkered down behind earth walls at their bleak desert outposts.

Hassan said Iraq has deployed extra forces to other wells nearby, but declined to outline numbers.

The well, which has only been operative briefly in the 1970s, now sits in an effective no man's land as a binational committee prepares to begin work early next year demarcating the border in the oil-producing border region.

"After that the word will be very clear and precise. We expect and know the result is that the well is Iraqi, and the Iranians will admit this," said Ali Maarij, head of Iraq's state Maysan Oil Co., in charge of Fakka and surrounding fields.

Well No. 4 was drilled in 1979 and produced about 3,000 barrels a day, a small amount for a region that is home to some to the world's largest oil reserves. The well went offline in 1980 due to the Iran-Iraq war, and has been inactive since.

Yet the symbolism of the brief Iranian occupation was more serious. Fakka is part of the Maysan oilfield complex, with reserves of 2.5 billion barrels, which Iraq tried unsuccessfully to auction off to foreign oil firms this year.

The mere threat of future incursions or border feuds puts more risk onto the 10 oilfield deals the Iraqi government did secure this year, some of which are near the Iran-Iraq border.

Oil firms are already jittery about working in a country just emerging from years of bloodshed after the 2003 U.S. invasion, and where bombings and shootings are still common.

The occupation was also damaging for Iraq's Prime Minister Nuri al-Maliki, whose party is contesting March 7 national polls. His government's response to the dispute was relatively muted, and Iranian troops faced no apparent military resistance.

Iran-Iraq ties have warmed since the ouster of Sunni Arab Saddam Hussein in 2003. Many in Iraq's new Shi'ite leadership took refuge in majority Shi'ite Iran during Saddam's reign.

But relations have been strained by accusations of Iranian interference in Iraq and by Tehran's opposition to the presence of U.S. troops. Being seen as close to Iran has become a liability for Iraqi politicians ahead of the general election.

"We are determined and persistent in the defense of our border. We will not give up even an inch. We are confident and able ... and ready for any action at any time," said Major General Habib al-Husseini, head of Maysan security operations.