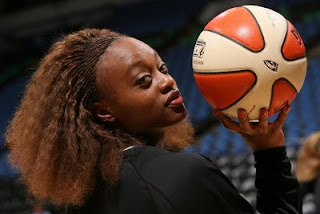 What a wonderful act of just plain nice.

With all the antic s of sport celebs it is wonderfully refreshing to read about this.

Merry Christmas to you and yours.

Charde Houston knows all about the kindness of strangers. When the star forward of the WNBA's Minnesota Lynx was 12, financial troubles forced her family out of their home in San Diego, Calif., and into a car where they would live.

Houston would go on to star on the basketball team of the University of Connecticut, but not without help. While her mother remained homeless, a revolving cast of coaches and friends stepped in over the years to provide rides to basketball practice, encouragement and even a bed to sleep in at night.

When Houston read about the plight of Aiyanna Bardwell, 11, a basketball player with dreams of playing in the WNBA, she decided to reach out.