Coming to a court near you soon 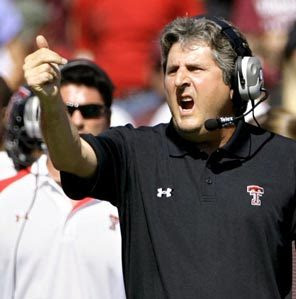 Well expect this to continue in the legal headlines for several years of litigation.

Putting that aside, Go Red Raiders in the Alamo Bowl!

San Antonio sports enthusiasts were abuzz Wednesday after Texas Tech fired coach Mike Leach, the quirky offensive mastermind who in 10 years won more games than anyone in the history of Red Raiders football.

On the day the coach took the school to court in an effort to overturn his suspension for alleged mistreatment of an injured player, he was fired with cause, meaning the university doesn't feel obligated to pay off the rest of the coach's five-year, $12.7 million contract.

In Lubbock, school officials handed a termination letter to Leach's attorney Wednesday morning, before the two sides were to appear in court for a hearing on the coach's request to work the Alamo Bowl.