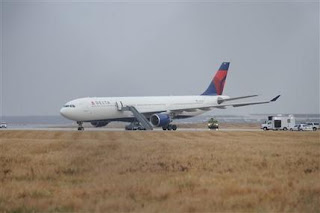 He probably wanted to blow himself up to prevent himself from deplaning in Detroit.

Okay, I'm just kidding. No, really I am.

This is going to be a problem til they figured out what he snuck aboard.

ROMULUS, Mich. (AP) -- An attempted terrorist attack on a Christmas Day flight began with a pop and a puff of smoke - sending passengers scrambling to subdue a Nigerian man who claimed to be acting on orders from al-Qaida to blow up the airliner, officials and travelers said.

The commotion began as Northwest Airlines Flight 253, carrying 278 passengers and 11 crew members from Amsterdam, prepared to land in Detroit just before noon Friday. Travelers said they smelled smoke, saw a glow, and heard what sounded like firecrackers. At least one person climbed over others and jumped on the man, who officials say was trying to ignite an explosive device.

"It sounded like a firecracker in a pillowcase," said Peter Smith, a passenger from the Netherlands. "First there was a pop, and then (there) was smoke."