Protect the children at McDonald's 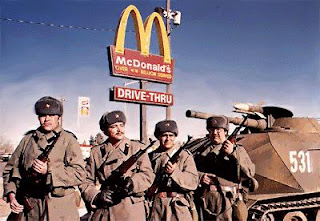 This creep needs to be caught quickly before he gets so emboldened he does something really bad.

Police believe a man who kissed a four-year-old boy on the lips at a McDonald's restaurant kissed a second boy at another fast-food outlet less than two hours later.

The man, aged between 45 and 55 and wearing square-rimmed glasses and a dark blue baseball hat, is believed to have grabbed the second boy, 11, in the toilet of a restaurant on the Princes Highway at Sylvania, about 10.20pm.

The boy had gone into the restaurant with his mother and sister and all three had gone to the toilet, police said.

While in the men's toilet the man allegedly touched the 11-year-old inappropriately and kissed him on the mouth before telling him not to say anything and running from the restaurant, police said.

The incident happened less than two hours after a man matching the same description allegedly grabbed and kissed the four-year-old boy at Drummoyne McDonald's on Victoria Road.

The boy's mother had gone to the counter two metres away to order dessert.

When she turned her back, a man approached the boy and his sibling. He grabbed the boy's face, kissed him on the lips and gave him a lollipop, police said.

He left the restaurant in a small white hatchback car with yellow and black number plates, police said.

He was described as being about 170 centimetres tall. In addition to the baseball hat and glasses, he was wearing a blue shirt and dark blue pants and was carrying a shoulder bag.

Burwood police have released CCTV footage of the incident.

The incident was followed by an alleged abduction attempt yesterday of an eight-year-old boy in Sydney's west by a man driving a car of a similar description - and covered only in a fluffy blanket.

The boy was at the intersection of Hunter Street and Melville Road in St Clair about 6.30pm when a man stopped his car near the boy and asked him to get in, police said.

The man is believed to have offered the boy lollies, police said.

The boy ran home to tell his parents, who contacted police immediately.

A police spokeswoman said they were investigating the possibility the incidents were related, but said they had no evidence at this point.

Police asked anyone with information to phone Crime Stoppers on 1800 333 000.