Service men and women with heart 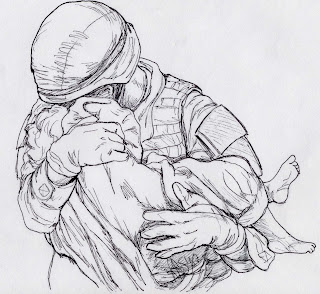 What a wonderful thing to do. Especially from those who already give so much to all of us.

Another way to serve.
Eric J. Weilbacher - The Herald-Zeitung

Maj. Patricia Lucas expects each of her classes every year to create and execute a service project on top of their regular course work.

Lucas expects only the best from her students.

“They are in this school to be physician’s assistants and integral to that means to serve others,” Lucas said.

The project her students devised this year was to sponsor 83 children identified by the Family Life Center, at the Tree of Life Church, as underprivileged, and to provide them with Christmas presents they otherwise would not receive this year.

On Thursday night, the class delivered 150 presents for those 83 children.

Children and their parents trickled in and out of the Family Life Center through the evening, finding the presents matched to their names and thanking the organizers.

Some of the children acted shy about receiving the gifts, others were full of laughter and energy with big smiles painted on their faces, eager to take their presents home in anticipation for a brighter Christmas morning.

“Mark and Rob came in to my office in October and said they would want 50 children to sponsor,” Scott said. “Then they came back and said they needed more.”

The IPAP students kept a wall in the back of one of the classrooms at Fort Sam Houston with cards listing each child’s name, age, something they wanted for Christmas and something essential they might need.

An estimated 150 to 200 service members at Fort Sam either took a card to buy gifts for a child in need, or helped out in another way.

“We set a $25 limit on each card, though people obviously spent more than that,” Sussman said. “What was neat to see was people who normally do not get involved in things, even some of the people that I thought were more introverted and would never get involved do so, like this one very quiet, all business captain, she stayed last night and made sure that every present that wasn’t yet wrapped, she wrapped,” he said.

“I took my kids and they actually spent money on other kids and were really excited about it.”

Sussman said they could not have done the project without all the help they received from those other dozens of service members who pooled their resources and put it together for these families.