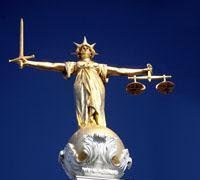 9-1-1 call: ‘The gun went off accidentally’
Charles Agar - The Herald-Zeitung

Jurors heard a frantic 9-1-1 call, saw photos of the bloody shooting scene and learned of a dying man’s testimony in the state’s case against Deborah Goodine Yarbrough, 51, on Tuesday.

Yarbrough faces a negligent homicide charge in the fatal shooting of Fredrick Richard Dwulet, 53, in the early morning of Jan. 13, 2008.

Dwulet died of gunshot wounds from a Colt Trooper .357 Magnum found in the kitchen of the trailer the two shared in the Comal Farms subdivision north of New Braunfels.

If convicted, Yarbrough could face from two to 10 years in prison.

Yarbrough covered her face and wept in court Tuesday while listening to her frantic 9-1-1 call from the night of the shooting.

“My boyfriend and I had a fight and I didn’t know that the (expletive deleted) bullet was in the chamber and it went off,” Yarbrough said in the recording. “The gun went off accidentally.”

Dwulet can be heard in the background say “I’m dying” at one point in the recording and later asking for water.

In a police vehicle recording taken when officers arrived, Dwulet can be heard saying, “She shot me in the kitchen.”

But jurors heard little of Dwulet’s dying testimony on Tuesday because the officer who interviewed Dwulet at the scene was called away on a family emergency. The officer is scheduled to testify in court today.

Yarbrough mentioned the argument with her boyfriend in her 9-1-1 call, but later, while being recorded on a police vehicle microphone, she said that she and Dwulet had come home for a romantic evening and that she had bumped the gun and it went off.

In another recording, she said she had been cleaning the gun.

Over and over on police vehicle recordings, Yarbrough is heard saying she didn’t know there was a bullet in the chamber and that the shooting was an accident.

“Oh, help him, please,” Yarbrough pleaded from the back of the police car after the shooting. She called Dwulet her “dream man.”

New Braunfels Detective James Rackley walked jurors through a diagram of the bloody scene and photos of the zig-zagging blood trail and the blood-soaked white couch where Dwulet collapsed while awaiting paramedics.

Rackley testified that powder burns and the position of Dwulet’s arm during the shooting were consistent with a close-range shot and a man trying to defend himself.

In her cross-examination, Yarbrough’s attorney, Allison Lanty, asked Rackley about the arsenal of other weapons police recovered at the scene, including other large caliber handguns.

Lanty also asked Rackley about a nightstand drawer where the gun was allegedly stored. The drawer appeared closed in early crime scene photos and open in later shots.

In his opening statements Tuesday, Assistant DA Harkins told jurors that negligent homicide does not mean the defendant was reckless or even knew she was doing something dangerous.

“It’s what a person ought to be aware of,” Harkins told jurors. “She brought a gun into the argument that led to the death of this man … It’s not an accident; it’s negligent homicide.”

In a brief opening, Yarbrough’s attorney, Lanty, asked jurors to pay close attention to details in the case and be ready for strong evidence in the final chapter.

“This case is about an accident,” Lanty said.

Prosecution testimony continues today at 9 a.m. in the Comal County Courthouse Annex.
Posted by Sam at 6:18 AM