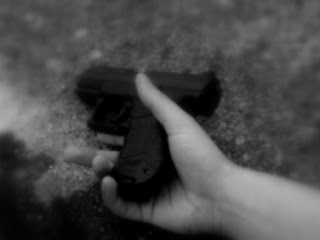 
Lawyers debate who held the gun
By Craig Kapitan - Express-News

Garden Ridge resident Amelia Roberts, 53, was hysterical three years ago as she stood beside an SUV along a U.S. 281 off-ramp with her husband dead in the driver's seat.

The gunshot wound to Garry Roberts' temple was self-inflicted, investigators initially thought. But a Bexar County medical examiner's report later found that gun powder from the barrel of the pistol had burned the back of his hand, indicating his hand was in front of the firearm — not holding it — when it discharged.

Amelia Roberts, an Army veteran whose three-year marriage was unraveling, is now on trial for his murder. Testimony began Wednesday.