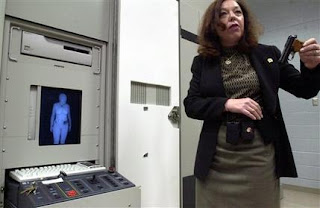 If making sure the guy next to me underpants don't explode on my next flight is to let some poor TSA operator see me nekkid in the backscatter machine I say that's fine.

Heck, give 'em hazard pay for having to view me.

WASHINGTON (AP) -- High-tech security scanners that might have prevented the Christmas Day attempt to blow up a jetliner have been installed in only a small number of airports around the world, in large part because of privacy concerns over the way the machines see through clothing.

The body-scanning technology is in at least 19 U.S. airports, while European officials have generally limited it to test runs.

Umar Farouk Abdulmutallab, the Nigerian accused of trying to ignite explosives aboard a Northwest Airlines jet as it was coming in for a landing in Detroit, did not go through such a scan where his flight began, at Amsterdam's Schiphol airport.