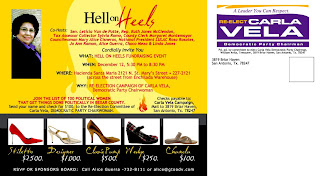 This woman wants to become the Bexar County Clerk??

Congratulations Gerry Rickhoff on getting re-elected.

She doesn't learn about the thefts until two-three days ago despite learning about the Bexar Co. Dems bouncing a check to the County back in August?? Great management there.

But then its what we've all come to learn about financial matters and Democrats.

Calling it a “terrible day for Democrats,” the outgoing chairwoman of the Bexar County Democratic Party said Wednesday that the party's treasurer siphoned $202,000 from one bank account and left another in the red.

Carla Vela — who resigned as chairwoman Tuesday night because she intends to run for Bexar County clerk — said Treasurer Dwayne E. Adams, 54, took funds over the past several months from a Compass Bank account that the party uses exclusively for primary elections.

She also said Adams dipped into the party's operating account, which now is overdrawn.