Screw him and his rights 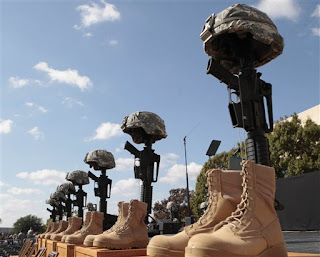 I have a hard time working up any sympathy for this a-hole.

What about the rights of the 13 soldiers he murdered in cold blood?

What about the unborn child he murdered?

Until they get someone there who understands Arabic to make sure he isn't making plans or giving reports let him pray by himself.

The lead lawyer for Fort Hood shooting suspect Maj. Nidal Malik Hasan said Monday that he believes the Army is violating Hasan's religious rights because it prohibited him from praying from the Quran in Arabic with a relative.

Attorney John P. Galligan said he learned that police guarding Hasan at Brooke Army Medical Center cut short a phone conversation Hasan was having with one of his brothers on Friday because Hasan was not speaking in English.

“Police at the hospital refused to let him pray, in Arabic, from the Quran with his brother,” Galligan said. “I think it's illegal and a violation of his religious rights.”