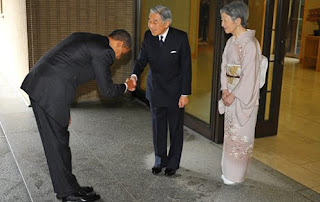 Can our President go anywhere and not cause gaffes and snubs?

I was in Norway on a business trip back in 1987 or so. The Norwegians love the United States.

Go have lunch with their King, for crying out loud. You hug dictators and bow to the King of Saudi Arabia and the Emperor of Japan. Yet snub Norway, not to mention the UK, our staunchest ally.

What is the deal?

Barack Obama's trip to Oslo to pick up his Nobel peace award is in danger of being overshadowed by a row over the cancellation of a series of events normally attended by the prizewinner.

Norwegians are incensed over what they view as his shabby response to the prize by cutting short his visit.

The White House has cancelled many of the events peace prize laureates traditionally submit to, including a dinner with the Norwegian Nobel committee, a press conference, a television interview, appearances at a children's event promoting peace and a music concert, as well as a visit to an exhibition in his honour at the Nobel peace centre.

He has also turned down a lunch invitation from the King of Norway.

According to a poll published by the daily tabloid VG, 44% of Norwegians believe it was rude of Obama to cancel his scheduled lunch with King Harald, with only 34% saying they believe it was acceptable.

"Of all the things he is cancelling, I think the worst is cancelling the lunch with the king," said Siv Jensen, the leader of the largest party in opposition, the populist Progress party. "This is a central part of our government system. He should respect the monarchy," she told VG.

The Norwegian Nobel committee, which awards the peace prize, dismissed the criticism. "We always knew that there were too many events in the programme. Obama has to govern the US and we were told early on that he could not commit to all of them," said Geir Lundestad, secretary of the committee.

Although Obama will not lunch with King Harald, he will see him on a visit to the royal palace.

Peace activists opposed to the Afghanistan war are planning a 5,000-strong protest in Oslo.

The visit will test Obama's rhetorical skills as he seeks to reconcile acceptance of the Nobel peace prize with sending an extra 30,000 US troops to Afghanistan.

White House officials said that Obama, who was planning to work on the final draft of his speech on his flight from Washington to Oslo, would directly address the issue of the irony of being awarded the peace prize while escalating the war.

The Nobel peace committee has been criticised for awarding Obama the prize before he has any major accomplishments in international relations.

A White House official said that it was not necessarily an award that Obama would have given himself.